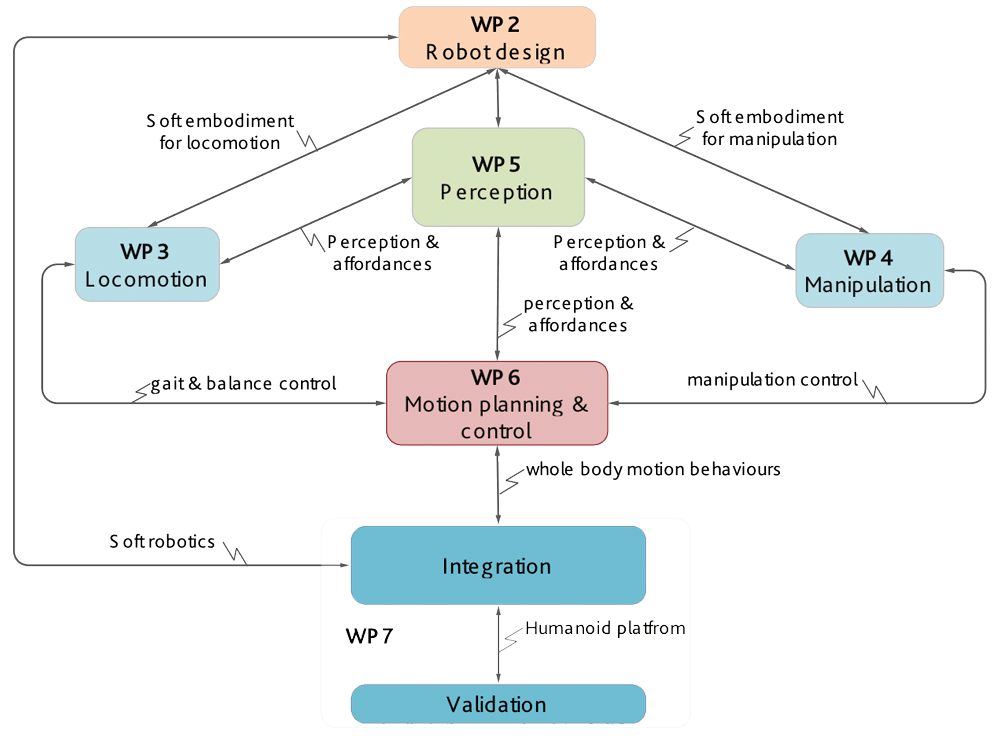 This WP aims to develop an adult size humanoid platform that will demonstrate the performance required to operate in a challenge scenario. From the hardware point of view to operate in challenge situations as those envisioned in WALK-MAN the robot will be designed within WP2 for exploiting three hardware performance indicators that we believe are the most important and will enable the robot to operate in such scenarios.  These three performance measures include i) high power capability and agile performance, ii) energy storage capacity and energy efficiency, and iii) physical robustness. To achieve the required performance we will rely on the development and use of soft actuation components that will combine high performance drives and novel soft transmission systems arrangements. The WP specific objectives are:

The objective of this WP is to develop an integrated locomotion controller, which can (i) steer the robot within hazardous and unstructured environments; (ii) autonomously choose between different locomotion modes and gait patterns, depending on the perceived environment; and (iii) recruit whole body to stabilize the gait (by changing the body posture to generate internal forces and torques), avoid falling or protect the body during an unavoidable fall.

The WP will develop a unified control framework for the above-mentioned objectives by investigating two different approaches. The first focuses on a biologically inspired approach which applies neuromechanical primitives including muscle models, reflexes, etc. and their combination of central pattern generators. It also emphasizes the development of task level controllers to coordinate different primitive modules for initiating and terminating gait. The second approach utilizes the whole-body sensory fusion to generate an effective and reliable stability measure of the robot, and develop balancing control strategies exploiting the full-body dynamics.

This WP will involve extensive, systematic experimental of the proposed controller using the EPFL and IIT COMAN robots at the initial phase of the project and the new developed humanoid at later states when the new hardware will be available.

In this WP we will build a theoretical framework for the analysis and control of whole-body loco-manipulation.  The existing literature on whole-hand manipulation and on humanoid locomotion will be merged and extended, to provide a coherent set of new tools.

The main advancements with respect to the existing literature provided by this WP will be the capabilities to model, control, and teleoperate a robot in complex tasks that present the essential requirement of managing of contacts between itself and the environment not restricted to its extremity limbs. This WP is supposed to provide some of the most basic tools at the core of the project success. Models developed in this WP will constitute a solid theoretical basis for simulation, design and control of the soft-robotic hardware developed in WP2. Models and control laws will be exploited in the visuo-haptic exploration. Moreover the control laws, developed in this WP, will enable the execution of complex loco-manipulation tasks for high level behaviours.

This work package deals with the development of the required perceptual processes needed to provide the environmental model required to act upon the surroundings. The research conducted within this work package is driven by two properties resulting from the application scenarios: 1) The environment is partly unknown and/or difficult to perceive. 2) Acting upon the environment is a prerequisite for safe navigation. The partly unknown environment provides motivation for an exploration-based approach to perception. Important parts of the environment will be modelled by actively sensing its structure and properties. The exploration will rely on visual, haptic, inertial and proprioceptive sensory data to enable navigation, locomotion and manipulation. The goal of the exploration is the association of affordances to elements of the environment, which offer a direct link to executable skills of the robot.

For representation of affordances and linking of sensorimotor information to symbolic information we will rely on our previous work on Object-Action Complexes (OAC), a grounded representations of sensorimotor experience, which binds objects, actions, and attributes in a causal model.  These affordance-oriented action-perception representations bridges the gap between low-level sensorimotor representations, required for robot perception and control, and high-level representations supporting abstract reasoning and planning. In WLAK-MAN, OACs will be used describe whole-body actions associated with objects (or environmental elements). We will extend our previous work on grasping OACs to balancing OACs inspired by the idea that a stable whole-body configuration of a humanoid robot can be seen as a stable grasp on an object.

The objective of this WP is to design robust and efficient motion planning and control algorithms for whole-body loco-manipulation, integrating advances from other WPs, primarily WP 3 (Locomotion), WP 4 (Manipulation), and WP 5 (Perception) in a cohesive whole, demonstrating the ability to perform complex tasks in an efficient and robust way by combining elementary behaviours in real time.

This work package has two main objectives. The first is to integrate all the components (hardware parts, software libraries and control modules) developed inside work packages WP2, WP3, WP4, WP5 and  WP6 into a functional humanoid prototype. The second objective is to perform the humanoid platform validation using plausible challenge tasks including a realistic challenge that will be defined in collaboration with Civil Defense bodies.