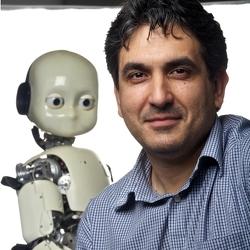 Giorgio Metta research activities are in the fields of biologically motivated and humanoid robotics and, in particular, in developing humanoid robots that can adapt and learn from experience. His research developed in collaboration with leading European and international scientists from different disciplines like neuroscience, psychology, computer science and robotics.

Giorgio Metta is author of approximately 250 publications. He has been working as principal investigator and research scientist in about a dozen international as well as national funded projects.