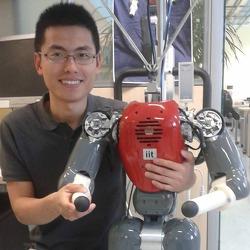 Dr. ZHIBIN LI received his B.Eng. degrees from HIT (Harbin Institute of Technology, China) in the Department of Control Science and Engineering, School of Astronautics, where he trained himself as a young robotic beginner in the 4th and 5th Asia-Pacific Robot Contests. During his final year in HIT, he worked at the Technical Innovation Centre of Control Science & Engineering, the lab in which he redesigned and rebuilt a new motion control system for RM-501 Manipulator.

After graduation, he joined NTU (Nanyang Technological University, Singapore) as a research student in the Division of Control and Instrumentation, School of Electrical & Electronic Engineering. In NTU, he developed, programmed and controlled a motion control system for robotic legs consisting of 6 BLDC motors. He also worked on data extraction of motion capture experiments, gait pattern generations of robotic legs, electromyography (EMG) signal conditioning and filtering.

He joined the Department of Advanced Robotics of IIT (Italian Institute of Technology, Italy) since 2009 and obtained his PhD degree on April 2012. During his PhD, he developed the stabilization and walking algorithms for the Compliant huManoid CoMan. He is now a post doctoral researcher and his research interest focuses on the balancing and walking of humanoid robots. His ongoing work is to improve the algorithms towards more natural and human-like balancing and walking for the Compliant huManoid CoMan.